The use of simulators to develop cars in a virtual environment is as old as the hills, but like everything involved in the design and use of EVs, simulation is potentially an old dog that can learn new tricks.

Range is one of the biggest considerations for anyone going electric. When buyers are handing over considerably more of their own cash than they would for an ICE car, expecting them to accept less capability from the new technology is asking rather a lot. But range isn’t just about the vehicle hardware and software, it’s also about adapting to a different driving style and making the most of the unique features an EV has, such as driver-controllable regenerative braking effort and coasting.

The problem with that for EV makers is the difference between individual drivers’ abilities and styles and whether or not making the effort to drive in a range-friendly way is something they want to bother with or even within their capability. So manufacturers need to find new ways of anticipating as many driving scenarios as possible, and the earliest way to do that in development is by adapting simulators.

Two features in use with simulators fast enough to work in real time are driver-inloop (DIL) and hardware-in-loop (HIL). DIL means “a driving simulator”, but it’s more than a screen and controls. It moves and behaves exactly according to the components fitted to the virtual car, so the engineer driving it can feel and gather data on exactly how the set-up responds, right down to individual part numbers. HIL includes actual hardware being considered for the car, like braking systems or whatever needs physically testing.

Simulator manufacturer Ansible Motion believes that hooking up an EV’s battery, motor and inverter with an HIL link enables manufacturers to gain a better understanding of how factors like pedal sensitivity and regenerative braking effort affect range at an early stage of development, before a prototype is built

It says there’s a knack to configuring different driving modes, such as Eco, Normal and Sport, in a way that doesn’t detract from the driving experience. For example, if an Eco mode is too sluggish or the driver finds it uncomfortable to use over a period of time, they might just stop using it, consequently shortening the car’s range.

Being able to simulate the behaviour of a virtual chassis in real time can also be tailored specifically to some of the unique features of EVs with their low centre of gravity. Would a more sophisticated design be best or would a simple design work just as well and maximise battery space? An Ansible DIL simulator was used in the development of the Ford Mustang Mach-E, and an early cut was deemed “not a Mustang”, leading to a revision.

It seems the real-world future is relying more on virtual worlds by the day.

Rise of the robots 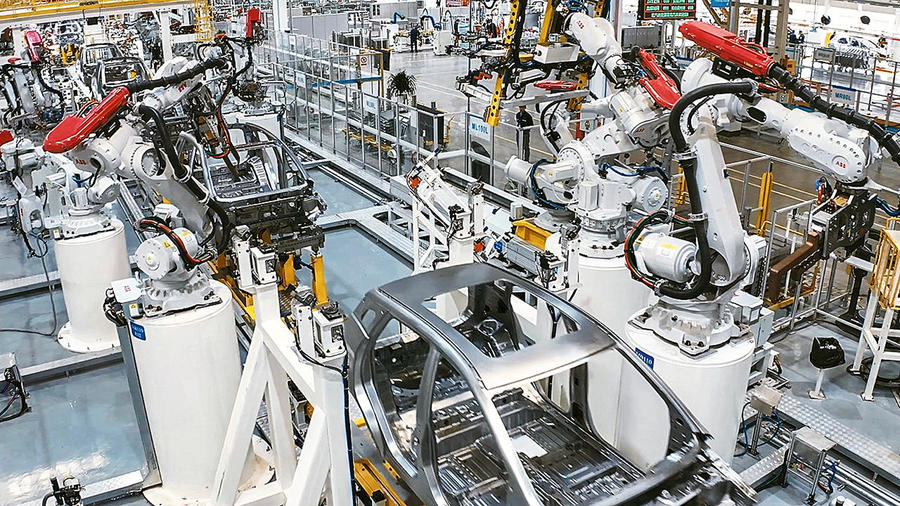 Is the rise of the machines as depicted in the Terminator movies really on the way? Hopefully not, but ABB Robotics predicts exponential growth in the development of more sophisticated robots as artificial intelligence matures. The familiar static robots used in vehicle assembly plants will be served components by Autonomous Mobile Robots; and smaller, self-learning robots will join them, performing warehousing and distribution tasks.