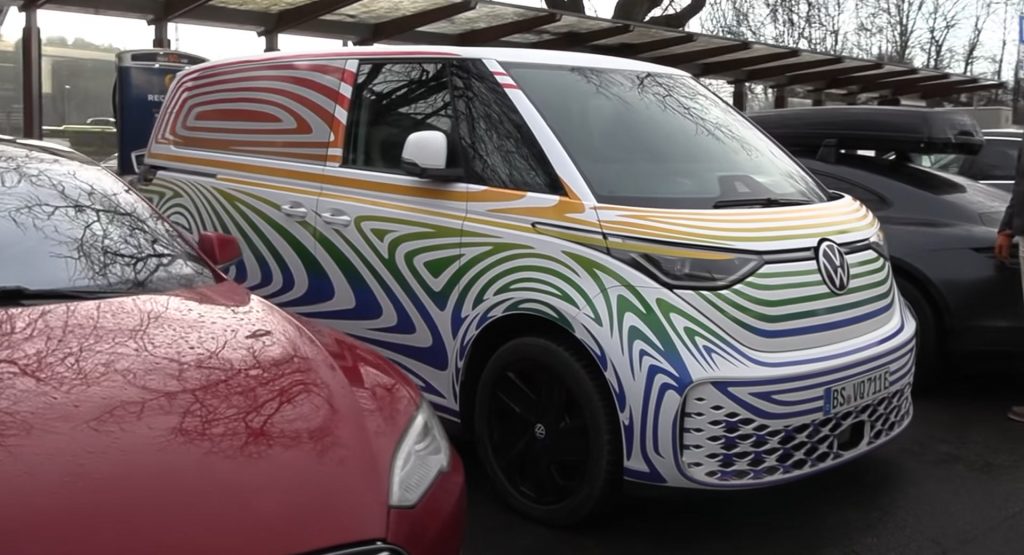 The electric VW ID.BUZZ is edging closer to the production line and popular Norwegian YouTuber Bjørn Nyland recently had the chance to see one in person.

Nyland has made a name for himself by conducting tests on a wide array of EVs and while recently charging his Model S at a public charging station, he was left stunned when a colorfully-camouflaged prototype parked in the spot next to him.

The German car manufacturer has previously shared images of prototypes with this camouflage wrap and while it does a good job at preventing prying eyes from seeing inside the cabin, it doesn’t do a great job of hiding key exterior design details. Among the areas of the van’s exterior that really catch the eye of the YouTuber include the LED daytime running lights and the very short nose.

Elsewhere, the YouTuber noted that the prototype was rolling on a set of 20-inch wheels with 255/45 tires at the front and 265/45 tires at the rear, quite wide for an EV that isn’t focused on performance.

Volkswagen will sell the ID.BUZZ in a plethora of different configurations. The entry-level model will probably have a similar powertrain to the ID.4, complete with a rear-mounted electric motor that pumps out 201 hp and 229 lb-ft (310 Nm) of torque. An all-wheel drive variant is also thought to be an inevitability and should deliver a combined 295 hp and 339 lb-ft (459 Nm).