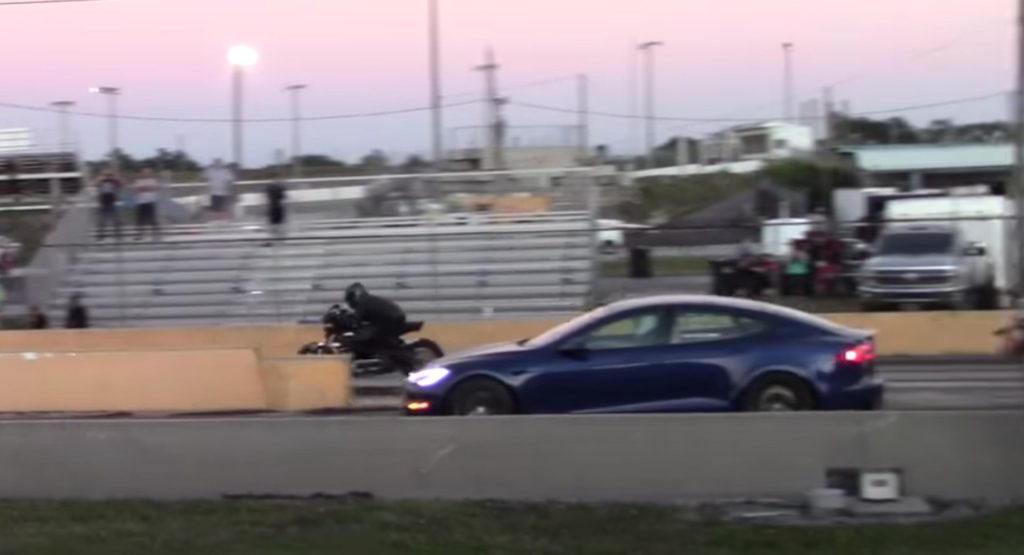 The Tesla Model S Plaid is literally the fastest accelerating production sedan, bar none, in the market right now. And it would be the fastest production car period if the $3,000,000 Rimac Nevera didn’t exist. We’ve seen the Plaid take on all sorts of supercar and hypercar giants and smoke them all. What happens when it goes up against the all-electric Harley-Davidson Livewire motorcycle though?

For the unaware, the Livewire is Harley’s first all-electric bike. It offers the same instant torque that electric vehicles are well known for and has a top speed of 95 mph (153 km/h). It’s been such a hit that Livewire has now been spun off as its own brand. With all that in mind, we should also note that the Livewire only weighs about 550 pounds (249 kg).

That’s about 100 pounds (45 kg) heavier than many top-end performance bikes but it’s still well below the total weight of a Tesla Model S Plaid. The sedan tips the scales at 4,766 pounds (2,161 kg). That huge difference in weight is what makes a race between the two all the more interesting.

In races between the Plaid and gas-burning superbikes, we’ve seen that from a roll, the bikes are so light that they can actually walk away from the Tesla. However, when the two leave from a dig, the bikes have no time to build up power before the Model S Plaid is long gone. Will this be more of the same, though? Well, if anything goes really well for the Livewire in this race, it’s the start.

The Harley leaps out to a quick lead of at least a car length right away. Quickly though, it’s reeled in by the Tesla. The Livewire owner has modified his bike to have better top-end performance but you wouldn’t know it watching this race. Of course, with a maximum output of just 105 hp, the Livewire was always going to struggle against any car with nearly 10 times that amount.

This isn’t a full quarter-mile drag race either and despite that, the Model S has more than enough track to easily walk around the bike. On the short track, the Tesla runs a 6.1 at 119 mph (191 km/h) while the Harley takes 7.27 at just 97 mph (156 km/h). Maybe we’ll get to see a Model S Plaid take on the all-electric Lightning LS-218, which holds the title of the world’s fastest street-legal production motorcycle since 2014, sometime in the future. That should be much closer.