Tata Sierra was one of the SUVs from the manufacturer that was launched ahead of its time. It had a very unique design and also offered many features that other cars during that time rarely offered. Tata Sierra as we all know was a three door SUV and the main highlight in this SUV was the large glass arear that was available for the rear seat passengers. It came with features like power windows, AC, power steering and much more. Car market in India was at a stage where people were looking for practical options and that is one of the reason why, the three-door design of the Tata Sierra did not become popular among buyers. Just like Tata Sierra, Tata Estate also did not become much popular because of the body styling. Station wagons have never been popular in India and this one was no exception. Here we have a video that shows both Tata Sierra and Tata Estate along with Tata Sumo being used in the Prime Minister’s convoy in 1995’s Republic Day Parade.

The video has been uploaded by Bichu N.S on his YouTube channel. The video has been created by the vlogger as a tribute to Tata Motors. It is actually a trimmed version of the Republic Day parade that was telecasted by the National Broadcaster – Doordarshan in 1995. The video is not just about the Tata Sierra and Estate. It also shows a convoy of Maruti Gypsy and Hindustan Ambassador which was a popular car among politicians. 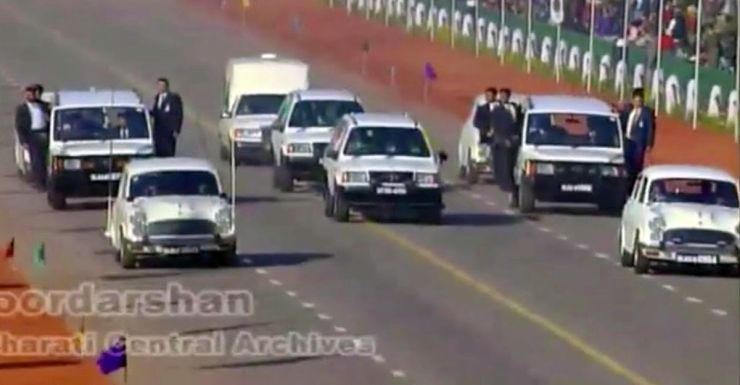 Hindustan Ambassadors can also be seen in the convoy. The Tata Sierra seen in the video is being used by the then Prime Minister P. V. Narasimha Rao. The cnvoy slowly moves towards Amar Jawan Jyoti. The Amar Jawan Jyoti has now been merged with the newly built War Memorial which is few 100 metres away from it. The Special Protection Group (SPG) were using the Tata Sumo. The group protects Prime Minister and their immediate families anywhere in the world.

As Prime Minister’s Sierra comes to a stop, SPG commandos jump from the Tata Sumo and create cover for the Prime Minister. One of the commando opens the door and comes out from the Sierra. After he had inspected the surroundings, Prime Minister can be seen coming out from the back seat of the Sierra. As Tata Sierra was not the most practical SUV, even the Prime Minister had to come out after folding the co-passenger seat. Tata displayed a concept for Sierra at the Auto Expo few years ago and there are chances that it will make its way back as an electric SUV.