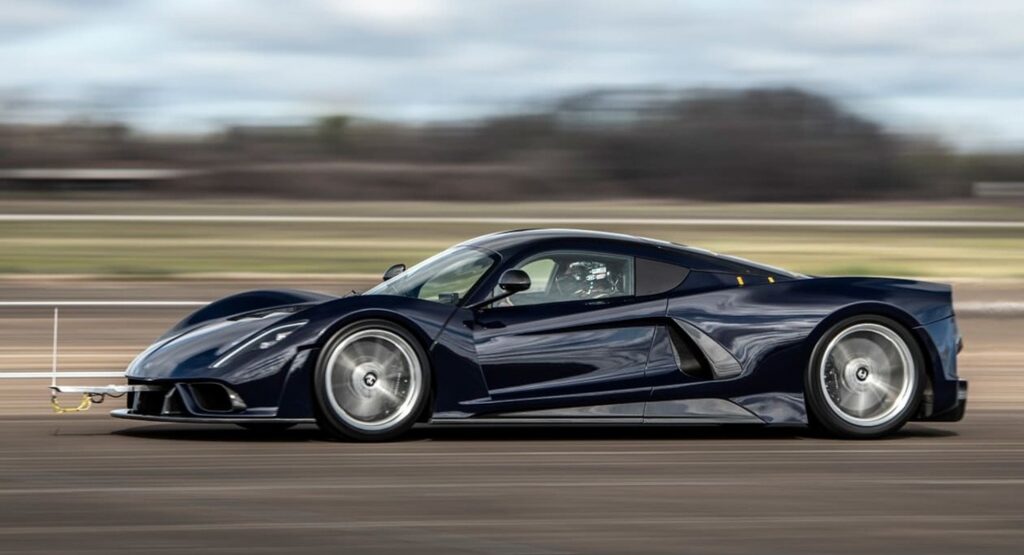 It feels like we’re on the precipice of a top-speed breakthrough. Today, Hennessey has shown us their next step towards the goal of reliably eclipsing 300 miles per hour (483 km/h) . They’ve been dutifully testing the Venom F5 and for the first time, we get to see them go into its top mode.

The setting is unsurprisingly named F5 after the full force on the Fujita tornado scale, and the 1,817-horsepower setting on this hypercar. When totally unleashed, Hennessey hopes this car can not just do 300 but 311 mph (500km/h) or more. That would take the “production car top speed record” and plant its flag firmly in Texas.

The video that dropped today is pretty short in duration and detail. It shows John Hennessey and one of his team members piloting an Audi as they watch the Venom F5 tear up and down the runway. Both from inside of their car and from the shots taken outside one thing is especially striking.

The noise that the Venom F5 makes in the world around it is very unique and unusually thunderous. It sounds nothing like a shrieking V12 or a burbly muscle car. To say that it sounds almost like a storm settling in might be a bit egregious but it actually feels the most accurate.

From inside the cockpit, we don’t get to see the car reach any speed above 41 miles per hour. Nevertheless, it’s obvious from the other footage that 200 mph (322 km/h) is somewhere in the rearview mirror. In an email to Carscoops, Hennessey described this video as “testing high-speed stability beyond 250mph.” That number is incredibly impressive all on its own but we know that a handful of cars can already do that.

This isn’t anywhere near the end of the course though. Hennessey also teased a near-future run at the top speed title saying “It’s another exciting step on the road to seeing how fast the car can go in just 3.2 miles at Florida’s NASA runway in the coming months!” We can’t wait to see how fast this force of nature can go.