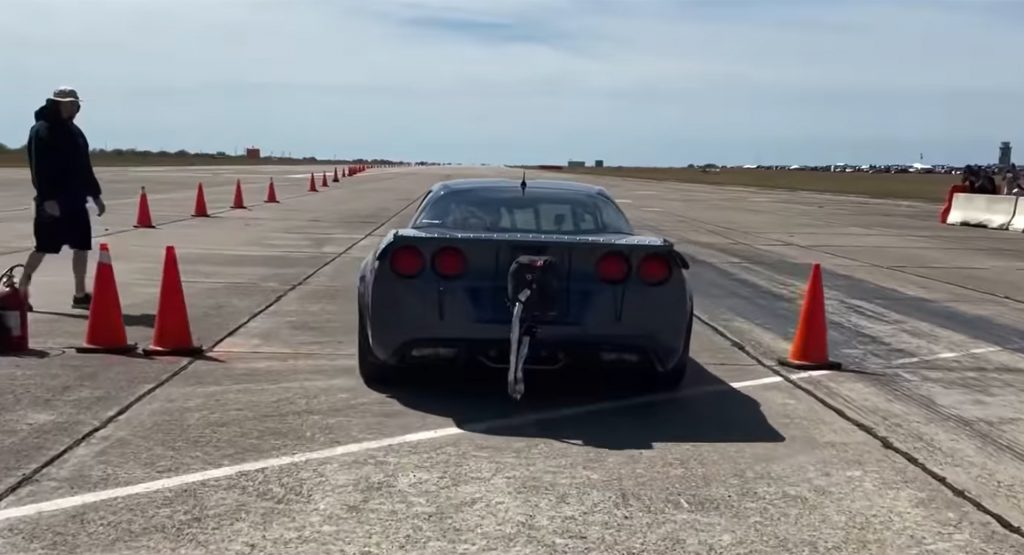 A modified Corvette Z06 went over 240 miles per hour at a Texas Mile event, earning the top score of the weekend and surpassing the top speed of an automotive icon.

Owned by Pierce Marshall, the 2011 Corvette Z06 Carbon Edition achieved a top speed of 242.7 miles per hour, a personal best for the car and driver, as well as surpassing the top speed of one of the world’s fastest production cars: the McLaren F1.

The vehicle was built by Andy Mages, a professional GM tuner and owner of ADM Performance in Lewisville, Texas. The Z06 would have come stock with a 7.0-liter LS7 V8, producing 505 horsepower, but in its place is now a 6.55-liter (400 cubic-inch) LME block fitted with two turbochargers.

Unfortunately, we couldn’t find any data about the horsepower of the engine, but a Facebook post from 2015 by Andy shows the same car as having 1,200 horsepower. We can assume that it’s making a lot more than 1,200 now, though.

Read More: Zero to 60 MPH In 11 Secs? Meet The Slowest Corvettes Ever

The Corvette hits a top speed of 242.7 miles per hour (390.6km/h) and earned it the top score of the weekend. The speed is just slightly faster than the 241.1 (388 km/h) mph top speed of the McLaren F1 (with a rev limiter), and it took the McLaren a lot more than 1 mile to get up to its top speed, making this a seriously impressive feat.

Of course, the McLaren F1’s top speed is impressive because it’s a production car that doesn’t require a parachute. While the top speed of the Corvette is impressive, it’s clearly a purpose-built race car that wouldn’t likely be taken on a long road trip, unless you were a real mad man.

The Texas Mile is a bi-annual event that lets drivers both amateur and professionals max out their vehicles in a safe environment, without getting a really expensive speeding ticket. The event was held at Chase Field Industrial Complex in Beeville, Texas, with the next event will take place from October 28th to October 30th, 2022.