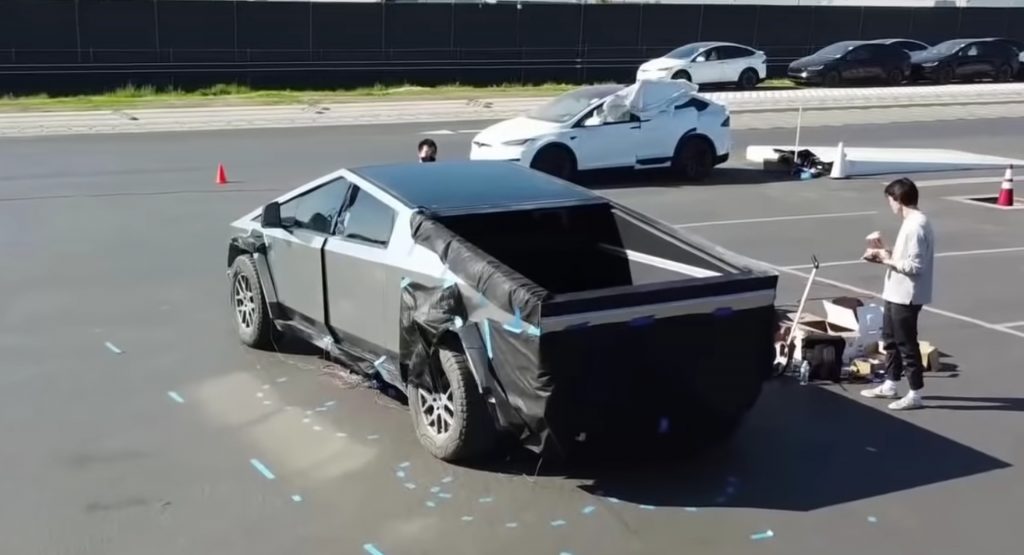 Lots of Tesla fans were disappointed when Elon Musk made it clear that the Cybertruck wouldn’t be rolling off of production lines in 2022. Nevertheless, the team is clearly still hard at work with the big boxy brute but we have a quandary. Why does this Cybertruck have so much odd body camouflage on it?

This video come to us from the YouTube channel ‘Met God in Wilderness’ and it was uploaded on February 7th so it’s the most recent spotting of the Cybertruck. It features about three minutes of drone footage focused on the pickup while three individuals work around it.

Right away it’s easy to see that the edge of the bed and the fenders have been covered up on the driver’s side only. The rear tailgate has been mostly covered up as well. Of course, we’ve all seen the Cybertruck a number of times so we’re not sure what these folks are up to but there are a few likely scenarios.

Related: This Guy Wants To Turn The Tesla Cybertruck Into A Catamaran

Notice all of the blue tapes around the truck? Those could be markings set there to get a clear understanding of the field of vision that cameras placed on the vehicle actually have. They could also just be testing a system like the proximity door poppers too since there’s no tape around the front fenders where we presume cameras will be able to see.

What we do know is that this Cybertruck shares the same mounting point for the giant windshield wiper seen in previous testing. The wiper itself is nowhere to be seen though unless it’s in one of those giant boxes on one side of the truck. In addition, we get a clear look of the wing mirrors that are required on the production model.

Musk has stated in the past that the team is trying to make them easily removable so that customers can choose for themselves if they want to leave them. While that might sound wild, keep in mind that Ford is shipping the Bronco Raptor with fog lights that aren’t legal on public roads either.

Do you have some experience in the automotive pre-production segment? We’d love to know what you all think is going on with this lightly camouflaged Cybertruck so let us know below.