Everyone loves a gift, no matter how big or small they are. Recently we are seeing a trend in India were people are gifting vehicles to their loved ones. We have seen parents gifting their children with vehicles or vice versa, husband and wife gifting cars each other and so on. Here we have one such video where a wife surprises her husband with a brand new Mahindra Thar. Mahindra Thar as we all know is currently one of the most popular SUV in the market. How did the husband react to his surprise gift? Let’s watch the video and find out.

The video has been uploaded by Preity प्रेरणा Vlogs on her YouTube channel. This video starts with vlogger talking about her plan. Her husband has no idea about the surprise gift that she has planned. In order to make things seem normal, she tells her husband that she is going to Delhi to her parent’s house and on her way she’ll also be visiting the bank for some work.

A final round of check-up was done and the dealership staff covered the SUV with a silver coloured cloth. Everything was set and by this time, the sister brought him near the dealership. The husband was confused to see his wife at first and then when she told him that there is a surprise he was excited. Within no time he figured out what the gift was and he was so amused that his head was unable to process it. He was excited, surprised, happy and all these emotions were clearly seen on his face. 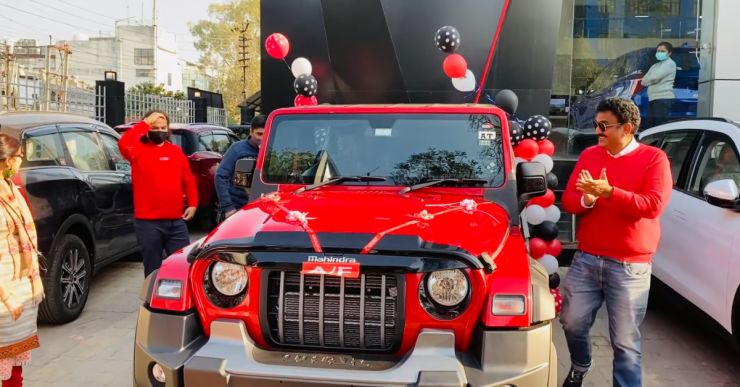 The dealership staff gave him a bouquet, he cut the ribbon and then uncovered the car. The Mahindra Thar in Red shade looked extremely good. The vlogger had opted for LX hard top automatic version. It is not clear whether this is a petrol or a diesel version. The in-laws and everyone else around the vlogger was happy to see the reaction.

Mahindra Thar is currently one of the most popular vehicle among SUV owners. the new generation Thar instantly became popular among buyers when it got launched in 2020. The demand for this SUV is so high that there is a waiting period as long as an year on the SUV. The car gets more features when compared to the previous generation model. It comes with a touchscreen infotainment screen, roof mounted speakers, automatic transmission, front facing seats for rear passengers, ABS, EBD, Airbags and much more.