We have featured several videos on our website where we have stresses the importance of an AWD or a 4×4 system while driving through rough terrains. Snow is one such tricky terrain where one has to be extremely careful while driving. Front wheels drive cars and SUVs can be driven on such terrains but, there performance is limited to some extent in such situations. Here we have one such video where a vlogger drove his Tata Punch micros SUV through the snow. What happens when you drive a small front wheel drive hatchback through snow? well, let’s check the video to find out.

The video has been uploaded by THE Anuj Pandey on his YouTube channel. It looks like the vlogger and his friend took their Tata Punch through a snow packed roads to test is capabilities. It looks like a new Tata Punch as we cannot see a registration plate on it. Punch is Tata’s recently launched model in the market. Tata calls it a micro SUV and competes with cars like Maruti Ignis and Mahindra KUV100 NXT.

Also read: Tata Punch base Pure variant: What does it offer?

The video does not share the exact location where the vloggers are driving the SUV. It is quite evident in the video that the place has received heavy snowfall and there were no other vehicles around the vloggers. Vlogger can be heard saying the same thing in this video as well. After driving in the snow for some time, the came across a section where there was heavy snow and they could differentiate between the road and the edges.

Till this point, Tata Punch managed to come without any problems. One of them gets out of the vehicle holding the camera and starts guiding the driver to take a U-turn. In such areas, it always a good idea to ask for assistance as the terrain itself is quite challenging. Once they starts taking the turn, things get bad. Tata Punch starts loosing traction and the front wheels start spinning vigorously. 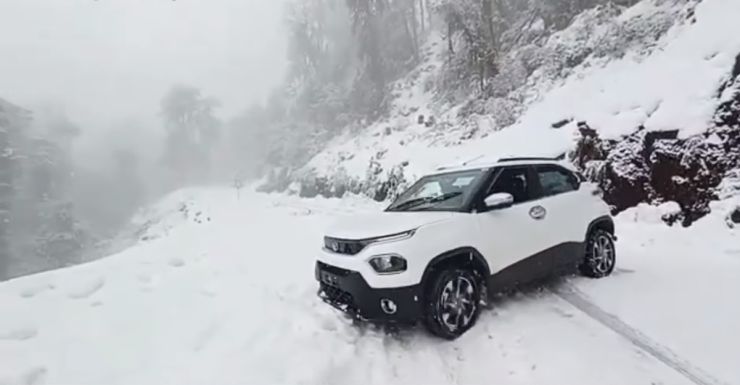 Tata Punch is a front wheel drive micro SUV which is designed and built for city roads. It is not a car that is meant for such extreme conditions. In this video, vlogger mentions that the Punch gets stuck in the snow. It does not say how they managed to bring the car out of the situation. Snow is one of the most trickiest surface to drive a car. Even if you have a proper 4×4 SUV, one has to be extremely careful.

Any sudden movement on the steering and you loose control over the vehicle. The acceleration should be linear and one must avoid sudden braking as it will only make your vehicle go out of control. If you are driving a vehicle in snow, it is a good idea to have snow chains which provide more grip to the tyres on slippery surface. Always go for such expeditions in a group and never take a 2WD car to such places. We hope that the vlogger was able to get his Tata Punch out from the situation without much problem.