Lately in India, there has been a trend among many people where they gift vehicles to their loved ones. At times its the parents who gift vehicle to their child and now there are many children who gift a car or a bike to their parents too. It is not always parents and children. There are videos about couples gifting each other such expensive gifts. Here we have one such such reaction video after a YouTuber decided to gift his father a brand new Honda Gold Wing cruiser motorcycle to his father.

The video has been uploaded by ASHWIN SINGH TAKIAR on their YouTube channel. In this video, vlogger rides his new Honda Gold Wing cruiser motorcycle to his father’s place to see his reaction. Vlogger had bought the motorcycle recently but, could not show to his father as he was stuck with some work. From the last video, vloggers had already realised that the vlogger had bought the Gold Wing for him and was very excited about it. 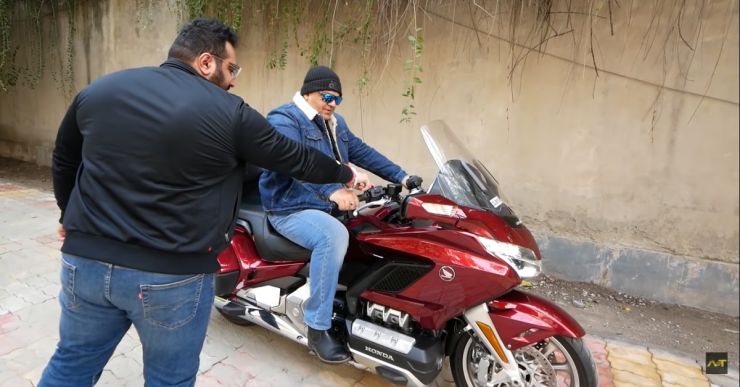 Vlogger’s father is amazed after seeing how huge this motorcycle actually is. It is a heavy motorcycle and offers long list of features with it. It comes with keyless start. The key gob has to be in the pocket and the handle bars can be locked and unlocked using the knob on the handle  bar. There is a fully digital instrument cluster that also doubles up as an infotainment screen. The screen can support Apple CarPlay and Android Auto. The screen is controlled using the toggle buttons on the handle bar.

This is the DCT version which means it does not come with a physical clutch lever. The buttons to shift the gear from Neutral to Driver and paddle shift buttons are all integrated on the handle bar. The motorcycle also has several storage compartment which the vlogger explains to his father in the video. The motorcycle as mentioned above is very heavy and in order make things easier for the rider, Honda is also offering a reverse gear with the motorcycle. It is powered by 1,883 cc, six cylinder engine that generates 126 Ps and 170 Nm of peak torque.

After checking some of the features of the motorcycle, vlogger’s father gets excited and starts talking about taking it on long road trips. He then takes the motorcycle out for a spin in the pocket road and comes back with a big smile on his face. He mentions that he is riding an automatic motorcycle for the first time and it would take his some time to get used to it. The video also included reaction from other people living in the area and they were all amazed to seen the motorcycle.