Sports car and Super car culture in India is slowly growing. There are several young super car owners in India and manufacturers like Lamborghini, Porsche, Aston Martin and even Mclaren have started offering their models in India officially. Many Indian celebrities now own a range of expensive sports cars and they have been spotted on the road several times. We often have seen reports of super car owners often getting in trouble with cops for loud exhausts or even rash driving. Here we have a video where a YouTuber takes a cop for a spin in his Lamborghini Gallardo.

The video has been uploaded by YPM Vlogs on their YouTube channel. In this video, vlogger was in his Lamborghini Gallardo which gets a Red wrap and spoiler at the rear. He explains the whole plan for the video. He mentions that couple of days ago, a traffic police officer had asked if he can give him a ride in his Lamborghini. Vlogger had agreed to do it and when he contacted the cop, he agreed to join him.

The cop can be heard saying in the video that he has seen such sports cars on road several times when he is on duty. This is the first time he was sitting inside one such car. He was excited to sit in the car and then as soon as the vlogger starts accelerating, the excitement level for the cop goes even higher. He mentions that whenever the vlogger was accelerating, it felt like his stomach along with his body was being pushed to the back. 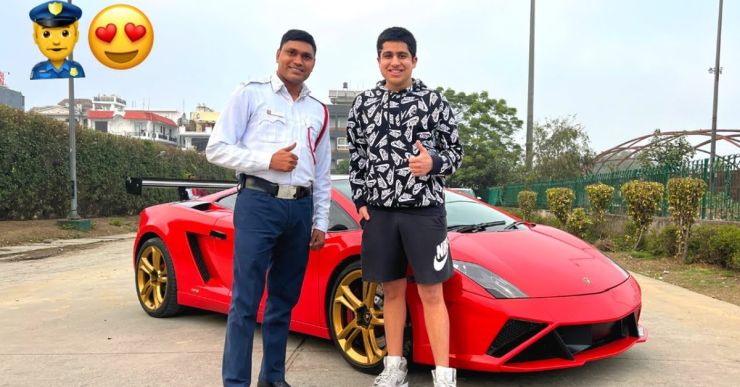 In a normal car one does not feel such things because it does not generate immense amount of power like a Lamborghini or any other sports car. It took him some time to get used to it. Once he was comfortable inside the car, he started asking about some of the gauges on the dashboard. Vlogger tells the cop that the gauges are there to check the oil temperature and it also shows other important information. The cop even asked how the car manages to go across speed breakers in Delhi. To this vlogger told him that the nose on this car can be lifted so that it does not hit the bottom.

Vlogger tell him about the Corsa mode which makes the car actually a lot more sportier. Once the car was slotted into Corsa, the acceleration and gearshifts are all optimised and the car behaves a lot more aggressively. The vlogger then drove the car into a empty space and parked the car so that the cop can have a closer look at the car. He got out and sat on the driver seat. He even started the car to just experience it. He did not actually drive the car. The vlogger then drives the car back and drops the cop to the same place where he was picked from. The cop was actually very surprised and was really happy that he got a chance to sit inside a Lamborghini. The happiness was quite visible on his face.

The post YouTuber takes cop for a spin in his Lamborghini Gallardo supercar [Video] first appeared on Cartoq.Cartoq Read More